Since the beginning of the Industrial Revolution, the world has seen its population and the need for natural resources boom.

As more people and wealth translate into the demand for global goods, the prices of commodities—such as energy, agriculture, livestock, and metals—have often followed in sync.

This cycle, which tends to coincide with extended periods of industrialization and modernization, helps in telling a story of human development. 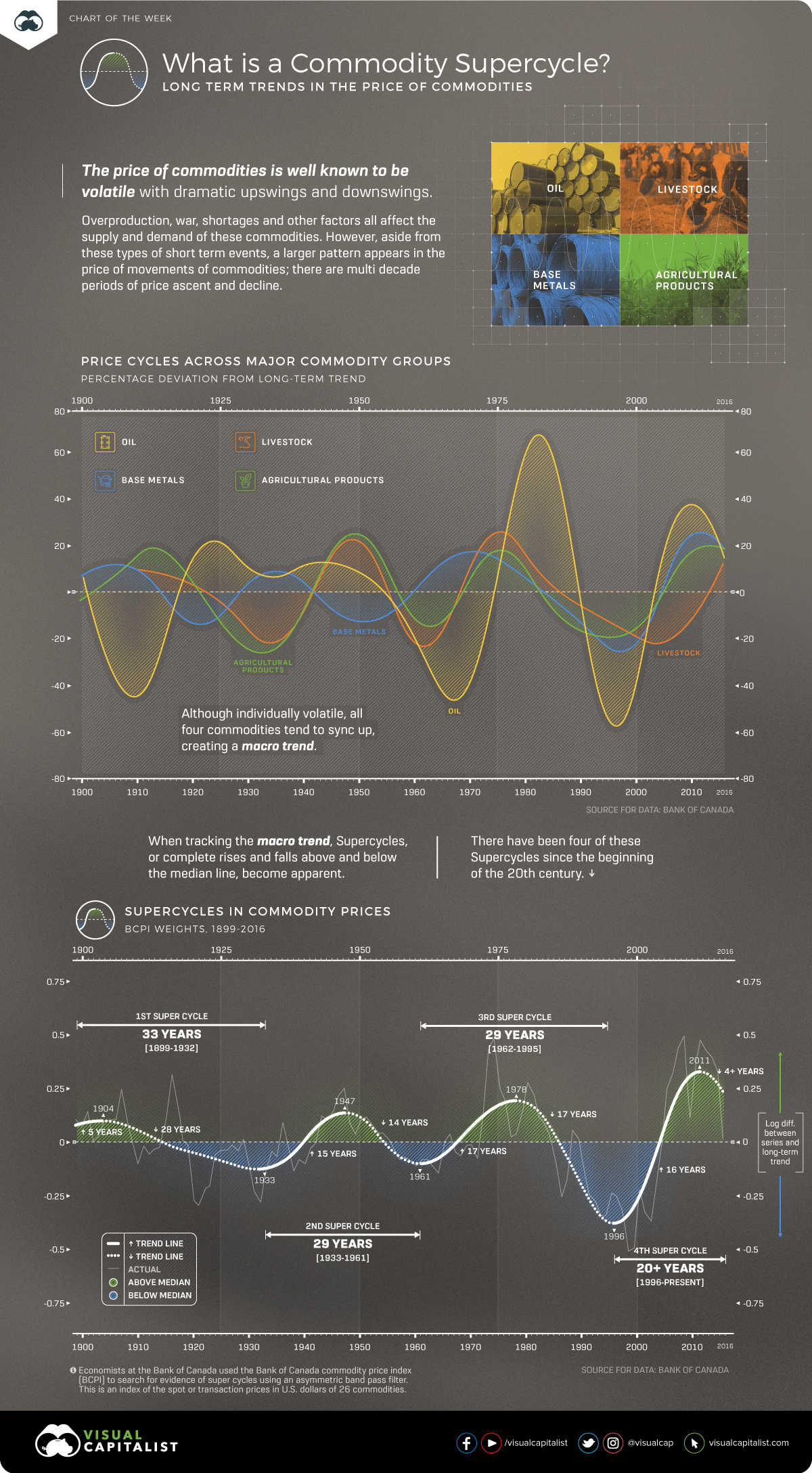 Why are Commodity Prices Cyclical?

Commodity prices go through extended periods during which prices are well above or below their long-term price trend. There are two types of swings in commodity prices: upswings and downswings.

Many economists believe that the upswing phase in super cycles results from a lag between unexpected, persistent, and positive trends to support commodity demand with slow-moving supply, such as the building of a new mine or planting a new crop. Eventually, as adequate supply becomes available and demand growth slows, the cycle enters a downswing phase.

While individual commodity groups have their own price patterns, when charted together they form extended periods of price trends known as “Commodity Super Cycles” where there is a recognizable pattern across major commodity groups.

How can a Commodity Super Cycle be Identified?

In our above chart, we used data from the Bank of Canada, who leveraged a statistical technique called an asymmetric band pass filter. This is a calculation that can identify the patterns or frequencies of events in sets of data.

Economists at the Bank of Canada employed this technique using their Commodity Price Index (BCPI) to search for evidence of super cycles. This is an index of the spot or transaction prices in U.S. dollars of 26 commodities produced in Canada and sold to world markets.

Using the band pass filter and the BCPI data, the chart indicates that there are four distinct commodity price super cycles since 1899.

The rapid industrialization and growth of a nation or region are the main drivers of these commodity super cycles.

Because there is often a lag in supply coming online, prices have nowhere to go but above long-term trend lines. Then, prices cannot subside until supply is overshot, or growth slows down.

Is This the Beginning of a New Super Cycle?

The evidence suggests that human industrialization drives commodity prices into cycles. However, past growth was asymmetric around the world with different countries taking the lion’s share of commodities at different times.

With more and more parts of the world experiencing growth simultaneously, demand for commodities is not isolated to a few nations.

Confined to Earth, we could possibly be entering an era where commodities could perpetually be scarce and valuable, breaking the cycles and giving power to nations with the greatest access to resources.

Each commodity has its own story, but together, they show the arc of human development.

China Takes a Comprehensive Trade Deal off the Table, and That Is Disastrous News for the U.S. Economy

Michael Snyder: Most Americans Are Not Taking This Coronavirus Outbreak Seriously, and That Is Potentially Very Dangerous

Netherlands Has the “Characteristics of a Narco-State”, Says Top Police Official

Are You Ready to Have Your Civil Liberties Severely Restricted? Because That Is Where This Thing Is Headed…