As part of the negotiations about a new relationship between the UK and the EU, the two sides have been discussing future arrangements for fisheries. This is a very sensitive area in the negotiations and so far the indications are that there has been little progress towards agreement.

One of the key reasons for a lack of progress is that the EU is demanding that the current regime on access to fishing waters remains in place, a set of arrangements which is extremely unbalanced and grossly unfavourable to the UK. Any significant righting of this imbalance is going to be very bad news for the EU fishing fleets and very good news for the UK. 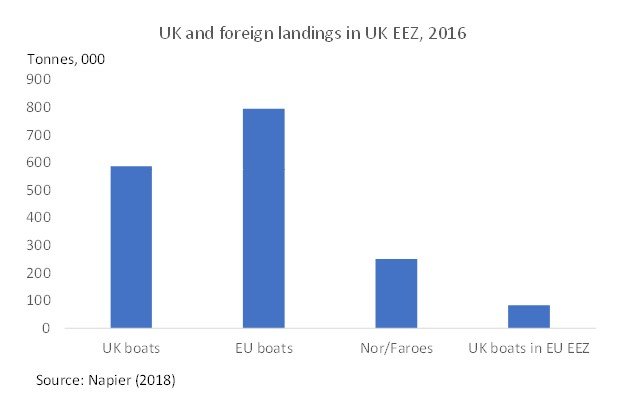 At the end of the transition period on Dec 31 this year, the default position will be that the UK will resume control over access to fisheries resources in its Exclusive Economic Zone (EEZ) under terms laid out under international law – specifically the United Nations Convention for the Law of the Sea or UNCLOS. Under UNCLOS, the UK’s EEZ extends out as far as 200 nautical miles and this will put the UK in control of a very large share of the total fishing grounds off the coast of mainland Europe.

Currently, access to these waters is open to all EU fleets, with the total available catch (TAC) divided up between national fleets into quotas determined at the EU level. This arrangement is extremely skewed in favour of EU fishermen: EU boats landed almost 50% of fish caught in the UK EEZ in 2016, versus just 36% for UK boats. UK boats also have some access to the waters of other EU states but this gets nowhere near balancing the situation – UK landings in the EU EEZ in 2016 were only 83,000 tonnes – around a tenth of the weight of fish landed by EU boats from the UK EEZ (see Chart 1).

An alternative approach to the current EU quota allocations would be to allocate fishing rights in the UK and neighbouring EEZs on the basis of ‘zonal attachment’ (ZA) i.e. based on the share of fish stocks residing within different EEZs, if necessary weighted by the time fish spend in a given EEZ over a year. This approach has been used, for example, in the EU’s fishing agreements with Norway.

This approach is favoured by DEFRA UK, which has produced some estimates of how current quotas would change if ZA were used in place of current EU quotas. The differences are quite dramatic. Using three different ZA measures, the UK’s share of fishing quotas across a set of major species would rise from around 25% now to over 60% – with quotas rising by 4-9 times for some stocks (Chart 2). 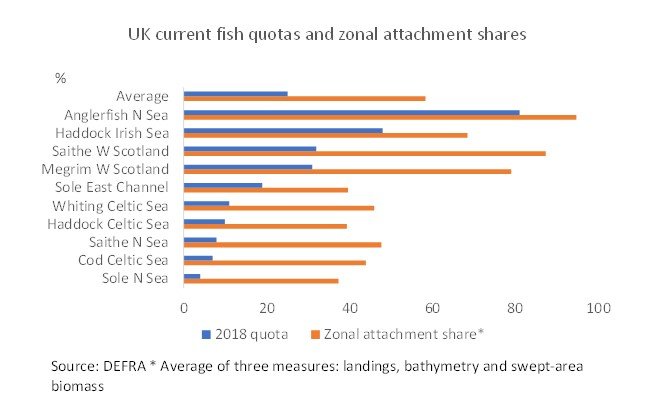 Changes in quotas along these lines would translate into a very large rise in the potential value of the UK annual catch – and this would remain the case even if UK boats lost their rights to fish in the EU EEZ and if Norwegian and Faroese boats retained their rights in the UK EEZ (very likely – note the UK and Norway moved quickly in 2019 to agree a temporary continuity fisheries deal). Overall the potential value of the UK catch would be likely to rise by 50-60% or £500-600mn.

So far, so good. But some observers have argued that in reality the UK would not be able to realise gains on this scale because if the UK insisted on new quotas along these lines, the EU would impose trade barriers on UK fish and there would be nowhere to sell the extra catch. Moreover, it’s argued trade barriers would also hurt other parts of the UK fish products industry such as aquaculture and fish processing (which in GDP terms are larger than sea fishing). Superficially, this argument seems to have some force as currently, a large share of UK output of fish and fish products is exported, of which some 63% goes to EU countries (Chart 3). 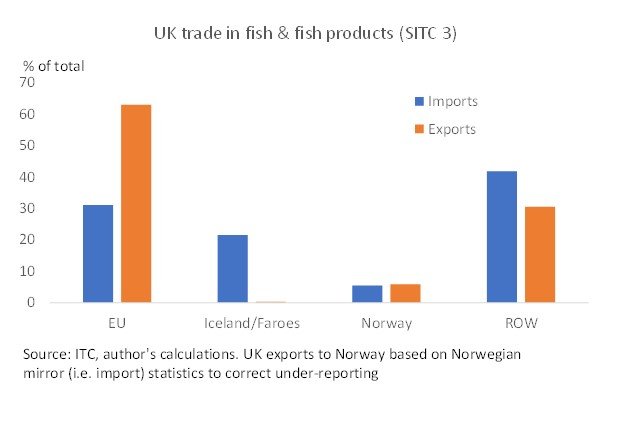 However, there are several reasons why this argument does not stand up to scrutiny: 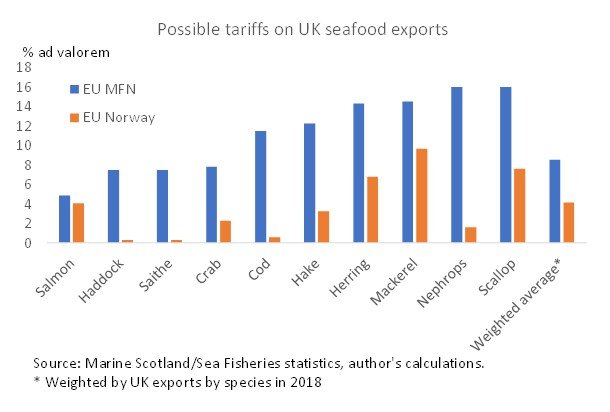 Detailed economic modelling work, incorporating all the above factors, supports the notion that higher EU trade barriers will not prevent UK fish and fish products output from rising substantially from a reallocation of quotas using the ZA method. The relevant papers here are Gasiorek and Walmsley (2018) and Marine Scotland (2018). These studies run a variety of scenarios featuring different levels of trade barriers and reallocation of quotas on a zonal attachment basis and model how these factors interact to produce changes in UK output and exports of fish. 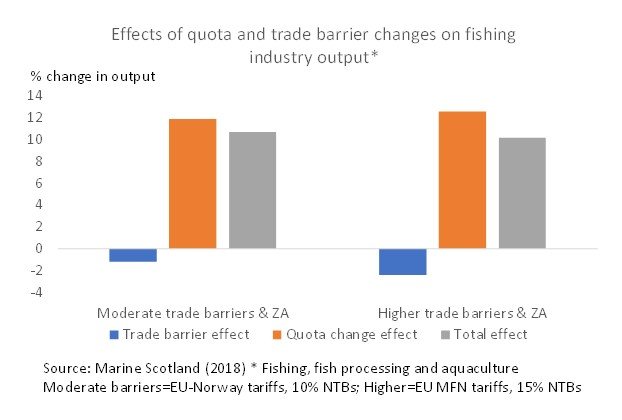 The key finding from these studies is clear – the reallocation of catch quotas in the UK’s favour dominates any negative effect on UK fish output from trade barriers. Two scenarios from the Marine Scotland study illustrate this. The first features ‘moderate’ trade barriers i.e. Norway-level tariffs and 10% non-tariff barriers. In this scenario, the trade barrier effect cuts UK fish output (fishing, aquaculture and processing) by 1.2% but the quota change effect raises output by 11.8% for an overall rise in output of 10.6%. The results are much the same in the second scenario which features higher trade barriers – MFN tariffs and NTBs of 15%. Again, UK fish and fish product output rises by over 10%.

The above analysis makes it clear that once the transition period ends, the UK has the opportunity to give its fishing industry – especially the sea fishing element – a major boost, regardless of whether free trade with the EU in fishing products is maintained. There may be some minor losers, for example the shellfish sector which already lands the lion’s share of the catch available in the UK EEZ and exports heavily to the EU, but the overall gains are large enough to easily compensate these losers. Moreover, alongside the direct gains to the fishing industry we can expect knock-on benefits to related onshore industries such as boat building and maintenance. Obviously, the regaining of UK regulatory control over fishing also gives the UK the chance to end environmentally damaging fishing practices such as pulse fishing.

On this basis, ‘no deal’ is arguably the best deal for the UK fishing industry. Nevertheless, it is probably worth exploring some kind of deal with the EU to try to avoid flare-ups at sea and to deter EU boats from overfishing in their own waters in response to reduced quotas. It is also possible that after many years of decline, the UK fleet might not initially be able to take advantage of all its new quotas. Under UNCLOS, if this is the case, the UK is obliged to offer access to neighbouring fleets.

In our view, it is crucial that any deal makes clear that the end-state is for the overwhelming share of fish stocks in the UK EEZ to be reserved for UK-owned vessels – as is the case for Iceland and Norway.

The analysis above also makes clear that trading ‘market access’ for quota shares i.e. allowing EU boats larger catches in the UK EEZ than zonal attachment would suggest in return for low or no tariffs on UK fish exports, would be the wrong approach. The benefits of lower trade barriers are very modest compared to the huge gains from new UK quotas based on zonal attachment.

Nevertheless, there is scope for some concessions from the UK side which would not abrogate these key principles –

These elements could form part of a UK-EU agreement on fisheries similar in shape to that which exists between the EU and Norway. But if the EU is unwilling to accept the broad principles of such an agreement, including the move to zonal attachment to determine catches, then the UK should not be too concerned about simply acting unilaterally at the end of the transition and excluding EU fleets from the UK EEZ.

‘Harry Western’ is a senior private-sector economist, and a regular contributor to BfB.

The Johnson Letter: Does It Violate the Benn Act?