Rumours that the Brexit trade negotiations will stall and ending the Transition may be delayed have accompanied escalation in the virus crisis. This article reviews the evidence on the progression of the virus and its economic consequences and concludes with hope that a return to normality in the second half of the year will allow Brexit negotiations to proceed on-course.

For most people, Brexit is the least of their worries this week. As the death toll associated with the virus escalates rapidly and the counter-measures assume a severity not seen since WW2, most are struggling to come to terms with a world that has changed at astonishing speed. The impact on Brexit has understandably been submerged beneath a torrent of virus-related news but there are important considerations.

The difficulty in carrying on with face-to-face trade negotiations is not the main issue. Teleconferencing is an adequate even if not completely satisfactory substitute. Much more important is the possibility that the transition period may be extended beyond the end of this year. The argument (not surprisingly encouraged by Remainers) is that the battle against the Covid-19 virus will occupy all of our administrative resources leaving no scope in government for implementing complex new trade and customs arrangements.

This is particularly relevant to the additional complexities of a ‘no deal’ (WTO or Australian scenario) option. If the preparations for no deal look impossible to achieve this year, then the threat of ‘no trade deal’ loses credibility and helps the EU to stall the negotiations. Ending the Transition period within a year is enshrined in UK law. A Johnson Government would be most reluctant to repeal the legislation and extend the Transition but could do so if the public felt that tackling the virus was the overwhelmingly more important issue.

However, the virus has already been beaten, at least for now, in China where no new domestic cases have been reported in recent days. If the same happened in the UK by June the normal life could be resumed including on negotiations over Brexit. The important questions for the UK are firstly whether the virus outbreak can be controlled in the ways that several far-eastern countries have demonstrated. Secondly, will the counter-measures adopted in the UK cause so much economic damage that dealing with the economy leads to delaying the preparations for leaving the transition.

It is difficult to assess the future path of the virus because the UK data on the epidemic is so unreliable. The official count of Covid-19 cases today (March 20th) is that there have been 3983 recorded cases and 177 deaths with the virus. This gives a hardly credible death rate 4.4%. This figure is higher than China’s and incredibly 18 times higher than the reported death rates in Germany, Austria, Belgium, Denmark, Sweden and Finland, and over twice that of France or the Netherlands.

The most likely reason for these huge differences is the number of tests in for the virus in each country. Germany has conducted twice as many tests as the UK’s 50,000 and is rigorous in testing the family and other contacts of those testing positive. Germany has greater health service capacity to deal with the virus and more respirators but at this stage of the outbreak it seems unlikely that the actual survival rates of infected patients should differ much between Germany and the UK more especially once patients reach hospital. Even if the survival rate of infected patients in the UK was half that of Germany the UK death rate would still be ten times higher than in Germany. 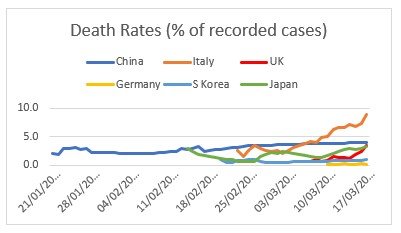 If we assume that the reporting of deaths with the virus is more accurate than counting those  who actually have contracted the virus, then it seems likely that the UK is grossly undercounting the number of cases by a factor of at least ten. Instead of the reported 3983 people testing positive  the actual number who have contracted the virus may be more than 40,000.  This would put the UK path of infected individuals on one of the highest growth trajectories of any country and higher than Italy. The rapidly increasing death rate in Italy obviously presents a grave warning to the UK.

The Chinese and South Korean examples do however show that the epidemic can be contained, and the stringent measures adopted in the UK will hopefully now be sufficient to control the outbreak. The wider question is the scale of the economic consequences. The closing of schools is a major escalation. Evidence from previous epidemics is that a third of infections occur in schools (with another third within families). Closing the schools is thus necessary and, in any case, large numbers of children had already been withdrawn by their parents.

The downside is that many parents and carers may need to stay off work leading to a loss of incomes and output in the economy. Even without school closures for non-key workers the removal of grandparents from child-minding already creates a problem for parents and hence for the economy especially since close to a third of children have only a single parent at home.  Some basic arithmetic suggests that 10% of the labour force may be affected leading to a loss of output of perhaps 5% for three months.

This alone is enough to cause a recession, but it is, of course not the end of the story. Although distressingly slow the Government has at last moved to guarantee the wages of employees in affected sectors who might otherwise be laid off. In addition to existing measures to defer VAT and council tax and compensate firms paying sickness benefits the Government has plugged several of the potentially largest holes in the economic dam. Unemployment may still rise but not now by catastrophic amounts.

Nor will the consequences for public finances be a huge problem and certainly not of the scale to present a danger to Brexit. The large cost of all of the direct remedial measures (perhaps £50 billion not counting the larger loan guarantees) is likely to at least double public borrowing this year, but the cost to the Government in interest payments will be small. This is due to Bank of England actions. Despite denials from the new Governor of the Bank of England, arrangements have been made to indirectly fund the measures through printing money rather than via interest-bearing debt. This repeats what was done in the wake of the 2008 banking crisis.

After several weeks of damaging hesitancy, No. 10, the Treasury and the Bank of England have now probably done enough to get the virus under control and to limit the economic damage. We can have some hope that the second half of 2020 will see something like a resumption of normality. In these circumstances the end of the Transition period might proceed on-course.

Elizabeth Johnston: MyPillow CEO “Appalled” to Be Attacked by Media after Calling on Americans to Pray

More Dead than Alive: Videos from Wuhan, China Show People Collapsing in the Streets as the Coronavirus Spreads

Globalisation: The God That Failed