View the high resolution of this infographic by clicking here

While we all see the same sky, we see it a bit differently depending on where we stand.

For those in the planet’s most extreme regions, the sun doesn’t follow the same pattern of seasons as it does in more temperate regions.

Today’s visualization comes from Sleepopolis and summarizes the top cities on each continent that receive the most and least annual sunshine hours. 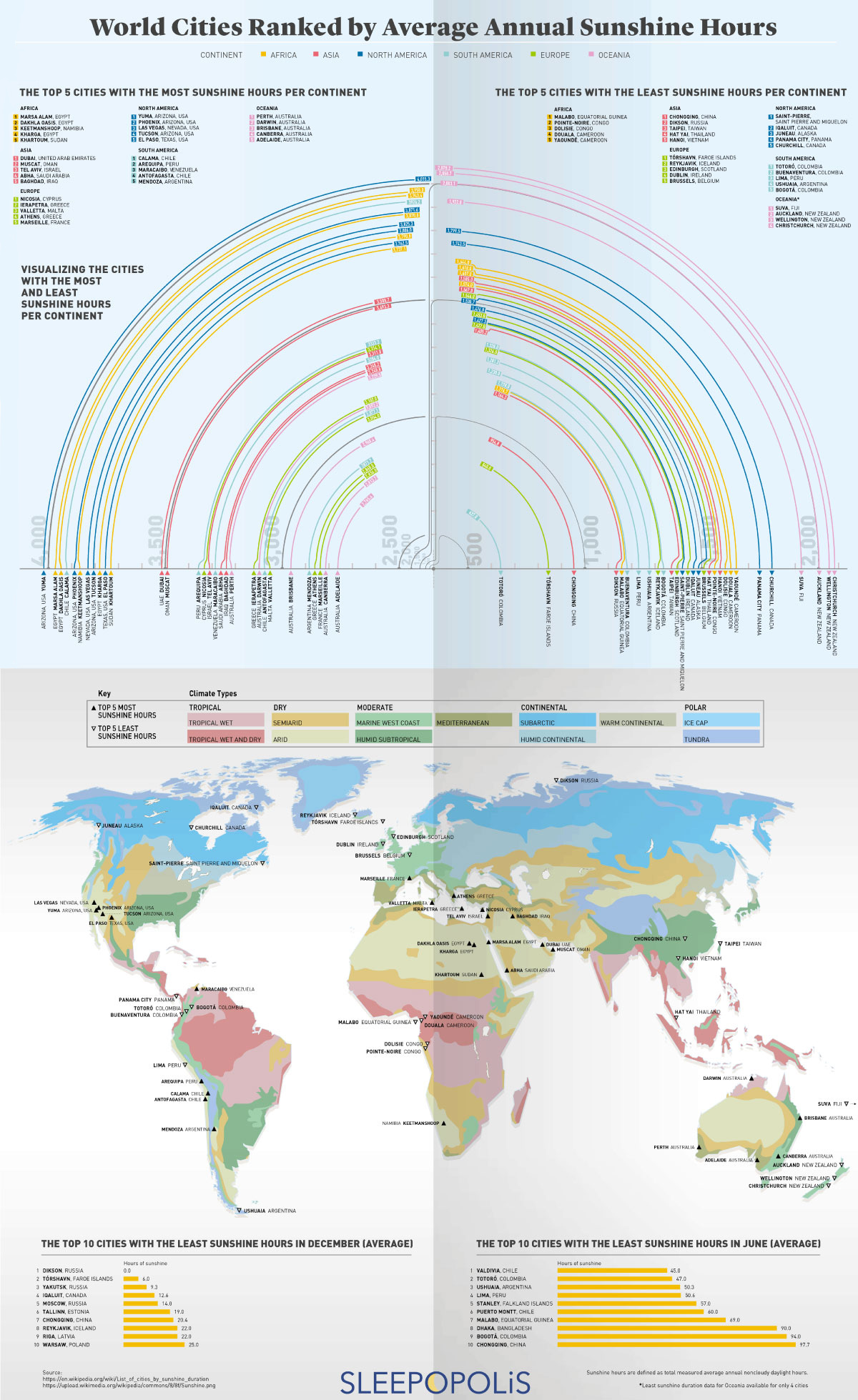 Ranked: Cities with the Least and Most Sunshine Hours

While the graphic groups the top five cities from each continent, the tables below highlight the top 10 cities from around the world that boast the highest and lowest annual sunshine hours.

Top 10 Cities with the Most Annual Sunshine

The sunniest city on Earth is Yuma, Arizona in the U.S. As the driest city in the U.S., Yuma receives less than 200 millimeters (8 inches) of rainfall and endures roughly 100 days of 40°C (104°F) weather every year. Yuma lies between the Gila and Colorado rivers, in a lush region that produces almost 90% of leafy vegetables grown in the U.S.

Arizona boasts three of the top 10 sunniest cities in the world, including Phoenix in the fifth spot, which is the 5th most populous city in the U.S. and is known as “the Valley of the Sun”.

Although perceived as a sunny location, Colombia borders both the Caribbean Sea and the Pacific Ocean, exposing it to higher variety in weather patterns and precipitation. Colombia alone is home to three of the top 10 cities with the lowest hours of annual sunshine.

Ranking second-to-last in the number of sunshine hours, Torshavn lies between the Scottish coast and Iceland and receives roughly 37 days of sunshine every year; the average temperatures on this island barely reach above 5°C (41°F).

Our sun doesn’t shine at the same level of brightness all the time. NASA has observed that the sun goes through “solar cycles” that last roughly 11 years─brightening and dimming at relatively regular intervals and impacting how intensely we receive sunlight at any given time.

Sunshine Near the Poles

Humans typically need exposure to the sun to maintain healthy sleep habits, as our brain has been hardwired to follow natural waking and sleeping rhythms.

However, several cities experience no sun at all for several months at a time in what’s known as the “Polar Night”.

Wherever you live, people have been watching and tracking the movements of the sun with rapt attention for millennia, even when we couldn’t see it.