If you’ve been following the ongoing trend of Big Tech censorship of conservative and Christian voices, you will know that Silicon Valley often gives the impression of blatant bias in the manner in which they allow some videos, comments, and accounts to remain on their networks while censoring or banning others.

This latest example of curious comment deletion on the part of Google-owned YouTube is certainly quite suspicious, although for their part, the company blames an “error.”

On Tuesday, The Verge reported that YouTube has been automatically deleting comments containing Chinese-language phrases commonly associated with criticism of the country’s ruling Communist Party (CCP).

YouTube confirmed to the outlet that this had been happening in error and was working to address the issue.

However, The Verge goes on to explain, if this has been happening in error, it’s been going on for at least six months. It should be noted that YouTube is not available in China, where social media access is severely restricted by the CCP.

The Verge found evidence that comments were being deleted as early as October 2019, when the issue was raised on YouTube’s official help pages and multiple users confirmed that they had experienced the same problem.

Comments left under videos or in live streams that contain the words “共匪” (“communist bandit”) or “五毛” (“50-cent party”) are automatically deleted in around 15 seconds, though their English language translations and Romanized Pinyin equivalents are not.

The term “共匪” is an insult that dates back to China’s Nationalist government, while “五毛,” (or “wu mao”) is a derogatory slang term for internet users paid to direct online discussion away from criticism of the CCP. The name comes from claims that such commenters are paid 50 Chinese cents per post.

These phrases seem to have been accidentally added to YouTube’s comment filters, which automatically remove spam and offensive text. The comments are removed too quickly for human moderation and are deleted even if the banned phrases are used positively (e.g., “The 五毛 are doing a fantastic job”). YouTube says it’s been relying more on its automated filters in recent months due changes to its workforce brought about by the pandemic.

While former Oculus founder Palmer Luckey brought attention to the automatic deletion of these phrases on Twitter on Tuesday, he was not the first to do so.

Back in May, human rights activist Jennifer Zeung shed light on the issue, and, as noted above, The Verge was able to find complaints regarding such deleted comments on YouTube’s official help pages which date as far back as October 2019. 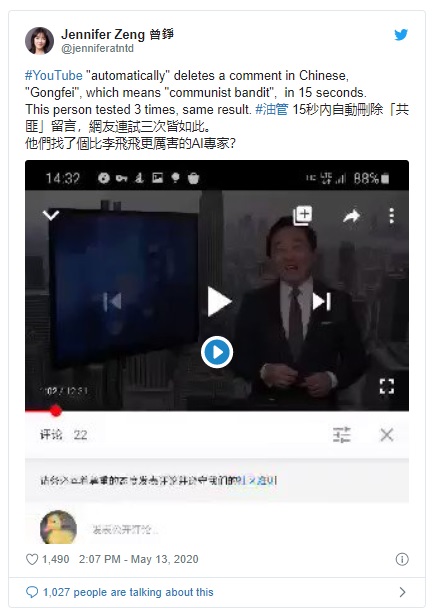 While we can only speculate as to whether YouTube is being honest about why these comments have been automatically deleted, its parent company Google is certainly no stranger to being accused of kowtowing to the CCP in the form of targeted censorship.

Google has frequently been criticized for accommodating the wishes of the CCP by censoring content. Most notably, it created a prototype search engine known as Project Dragonfly that complied with Chinese state censorship. The project, which was never deployed, is part of the company’s long-running struggles to enter the Chinese market.

When news of Dragonfly leaked in 2018 in a report from The Intercept, Google was criticized by politicians and its own employees for selling out its principles. During a Senate Judiciary Committee hearing in June 2019, the company said it had “terminated” the project and that it had “no plans to launch Search in China.”

Rather than Seeking Pandemic Reparations, Western Nations Should Be Repatriating Production: Op-Ed

John Whitehead: Sin Taxes and Other Orwellian Methods of Compliance That Feed the Government’s Greed