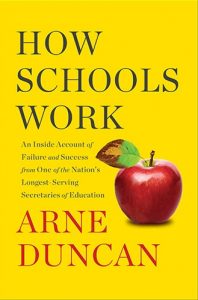 ‘How Schools Work: An Inside Account of Failure and Success from One of the Nation’s Longest-Serving Secretaries of Education’, by Arne Duncan

According to the opening pages of Arne Duncan’s memoir How Schools Work: An Inside Account of Failure and Success, American education runs on lies. Described by his publishers as one of the “nation’s longest-serving secretaries of education (2009-2015),” the country’s former top education official has finally provided, in 2018, a piece of writing on education.

It turns out to be a rambling and incoherent set of recollections of some of his experiences in his mother’s after-school program in Chicago, his seven years as superintendent of the Chicago Public Schools, and his seven years at the head of a federal agency that’s managed to turn K-12 education in this country upside-down and moving backwards — to judge by National Assessment of Educational Progress (NAEP) test scores for “disadvantaged” kids.

Readers do not learn what lies American education actually runs on (although the mediocre results we get do cost more money per pupil than other countries spend) nor how the author sought to remedy any of them in his long tenure at the U.S. Department of Education. How Duncan’s book got through the editorial layers of Simon & Schuster to be published as it is remains a source of amazement. Didn’t any supervising editor think that the public should learn something about the workings of a huge public school system known today, as almost all urban school districts are, for the failure of many if not most of its students to acquire an education in it? Or how Duncan as a superintendent sought to address what he saw as the obstacles students and their teachers and principals faced during his seven years in Chicago? Or how he approached education reform with his staff in Washington D.C. and a president who supported him? Didn’t any editor think Duncan’s book might be usefully organized by “lies,” with each chapter devoted to how he sought to address them, if he did, in Chicago and then nationwide?

Or why he didn’t address them?

The book is divided into what look like chapters, although none say much about any one topic. Mysteriously, we never learn whether having a highly educated father in the home made any difference in his life. Starkey Duncan, a professor at the University of Chicago, is nowhere mentioned or discussed in his memoirs — only his mother and her after-school program. Duncan acknowledged that the University of Chicago paid for his tuition at Harvard because of his father’s position on the faculty. Elsewhere on the Internet, we can find out that his father was a psychology professor at the university. According to the school’s web site, Starkey Duncan “served as the university’s Faculty Athletic Representative to the NCAA for more than 20 years.”

Duncan brought to both his major positions in education a lot of knowledge about basketball playing.  What else he brought is impossible to discern. He had no background in teaching or hands-on administrative experience in education. He refers to no well-known educators or academic experts on subject matter teaching or learning. Maybe he didn’t know any in Chicago. Maybe he doesn’t read much of anything besides sports columns. We don’t know. In the absence of any experience to draw on (besides helping his mother in her after-school program), we don’t know if he did any serious reading or reflection on any of the decisions on educational issues he made. It’s not in these memoirs, at any rate, a point also made by Aaron Pallas in his insightful review of Duncan’s book in The Hechinger Report.

Given the amount of turmoil that Duncan’s U.S. Department of Education has caused among parents and others (not just Common Core’s standards and tests but the intrusive collection of personal data from children), it would have been appropriate for someone with a magna cum laude degree from Harvard to tell us clearly what problems he and his staff were trying to address as part of their conception of reforming public education, or what education reform meant to someone in the central office in the Chicago schools, what major obstacles he believed he had to cope with, and why he ended up accomplishing so little that was positive and so much that made little sense to parents. As City Journal reviewer Ray Domanico commented, “Even after all the hard work in Chicago by Duncan’s administration and those that followed him, only 27 percent of Chicago’s eighth-graders were deemed proficient in reading or math in 2017 on the National Assessment of Educational Progress (NAEP), a marker for college readiness.”

Moreover, no evidence has ever been found for the benefits of the Ariel Education Initiative he worked on (the “I Have a Dream” dropout prevention program supported by John Rogers, a Chicago businessman and friend) and similar initiatives before being chosen to be chief executive officer of the Chicago Public Schools. Surely, Duncan has something to tell the public about the perils of education reform as he and his friends viewed them, if he can be coaxed to talk about them instead of the talking points for the reforms he seems to have advocated. He attributes the still-growing resistance to his administration’s education policies to “poor communication.” Otherwise, he sees nothing wrong with “central planning” in education, it seems.

When the ex-superintendent of a huge school system says that “better-off” kids need to participate in a statewide test (i.e., not opt out) so that teachers can tell how “poorer” kids are doing, we learn the extent of his knowledge about teaching and learning. Most teachers by the end of a school year know roughly how every single child in their classes is doing in whatever subject the teacher teaches.

He left the Chicago public schools after about seven years not much different from how he had found them. He did close a number of schools in his first years in Chicago, which he viewed as an accomplishment — they were closed because of low-performance or low-utilization or both — although a study by the University of Chicago in 2009 found that these school closings did little, if anything, to improve student achievement.

His appointment and lengthy tenure as U.S. Secretary of Education raise questions about a relatively new cabinet position. (The department evolved from a larger set of social concerns (Health, Education, and Welfare, or HEW) and was established as an independent cabinet position during President Jimmy Carter’s administration.) Should such a powerful position in education be simply part of the spoils of political victory, requiring no more than a president’s appointment and Senate hearings? Or, should the public expect some specialized training, significant experience in the schools, and a willingness to look at what’s been tried and whether it worked? A professor of education and policy studies at the University of Illinois-Chicago commented in an interview that Chicago was a “school system that is led at the top by virtually no educators.” And, referring to one of the initiatives Duncan and his aides oversaw in Chicago, the professor said it’s a “fact that there’s basically no research that supports any of the interventions that they’ve made under Renaissance 2010. And there’s a good deal of research that demonstrates that it has been damaging to students and to communities and has not improved their education.”

Duncan was fortunate in having Joanne Weiss, a biochemistry major at Princeton, as his right hand at the U.S. Department of Education during his first four to five years. (Duncan mentions no other staffers from his time there.) She had worked for 20 years at the New Schools Venture Fund, a philanthropy heavily supported by the Bill and Melinda Gates Foundation, and brought to the federal government’s education agency as little experience with the public schools as Duncan (and the Gates family) brought to national education policy making, but she was as committed as they were to re-making public education as they saw fit.

Not all of Duncan’s critics were or are Republicans, by the way. On July 4, 2014, the National Education Association, the largest teachers union in the United States, passed a resolution of “no confidence” in Duncan’s leadership of the U.S. Department of Education and asked for his resignation.

Given the huge changes that have been made to public education by his administration and the mostly negative results to date, he owes the public much more analysis, explanation, and just plain exposition than he has offered in the repetitious slogans and anecdotes he has scattered among his undocumented recollections.

Author: Sandra Stotsky, former senior associate commissioner at the Massachusetts Department of Elementary and Secondary Education, is professor of education emerita at the University of Arkansas.