Last weekend The Times reported that the Liberal Democrats had received a donation of £100,000 on 22 November this year towards its general election campaign by Ferring Pharmaceuticals. The firm produces puberty blocking drugs for teenage girls who want to be boys. Ferring produces Triptorelin, which is used as Gonapeptyl to halt the development of puberty in girls. It is also used to treat prostate cancer in men. As Ferring is a private company based in Switzerland, it is not possible to discover what proportion of its income is derived from the use of Gonapeptyl as a puberty blocker.

This outrageous revelation was made by a feminist researcher who tweets under the name of Jean Hatchet, and first appeared as a series of screenshots of her tweets on Unity News Network. She had dug into the Electoral Commission’s website records on donations to the Liberal Democrats. Later she also revealed that Ferring had donated over £1.4 million to the Liberal Democrats since December 2013. This raises important questions about the Coalition government as will become evident.

Puberty blockers for girls under 9 and boys under 10

The Times reported a Liberal Democrat spokesman as saying this about Ferring:

“Ferring is a long-standing supporter of the Liberal Democrats. Party policy is determined by members via working groups and at party conference.”

Ferring itself refused to comment on the revelations. This really is an absolute disgrace given what is known about Gonapeptyl. The Patient Leaflet says this about giving it to children:

“Treatment should only be started on girls under 9 years of age and boys under 10 years of age.”

Clearly then primary school-age children are being targeted here.

The Patient Leaflet goes on to make the following statements about puberty in girls:

“During treatment:
In the first month of treatment girls can experience mild to moderate episodes of vaginal bleeding. After finalising the therapy, development of puberty characteristics will occur. In most girls menses will start on average one year after ending the therapy, which in most cases is regular.”

“Your periods will stop during treatment. Once treatment has finished, your periods (menstruation) will resume 7-12 weeks after the final injection.”

The shamelessness of Jo Swinson

The last few days have seen Jo Swinson interviewed on her party’s gender policies, both before and after the revelation about its funding. On Twitter she promoted the official Liberal Democrat policies such as reforming the Gender Recognition Act, gender-neutral passports and gender-neutral school uniforms. 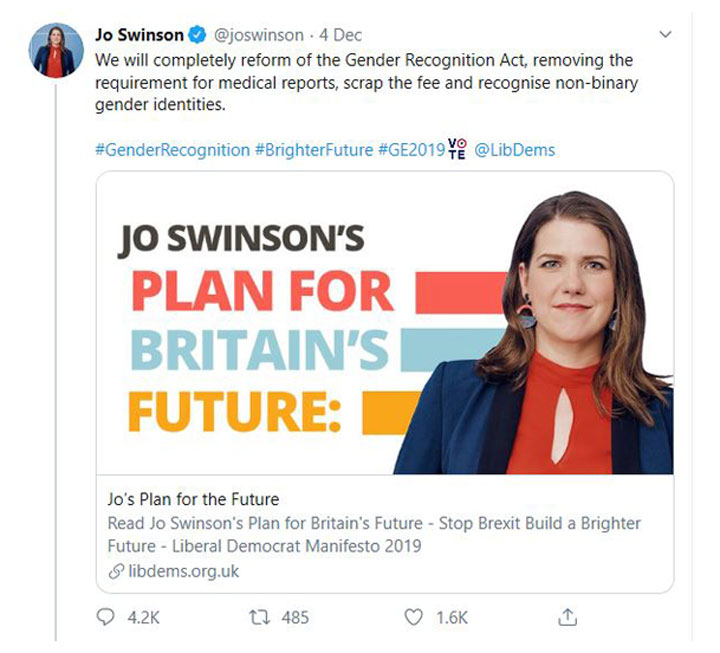 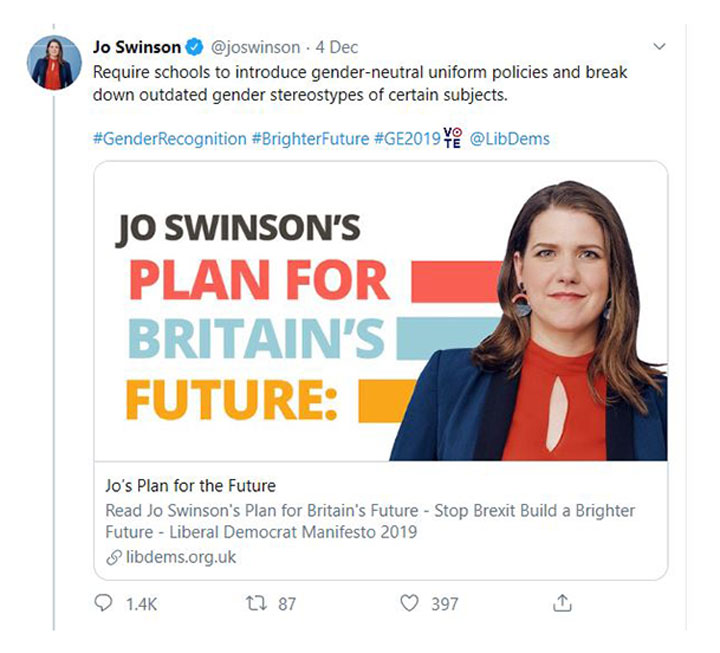 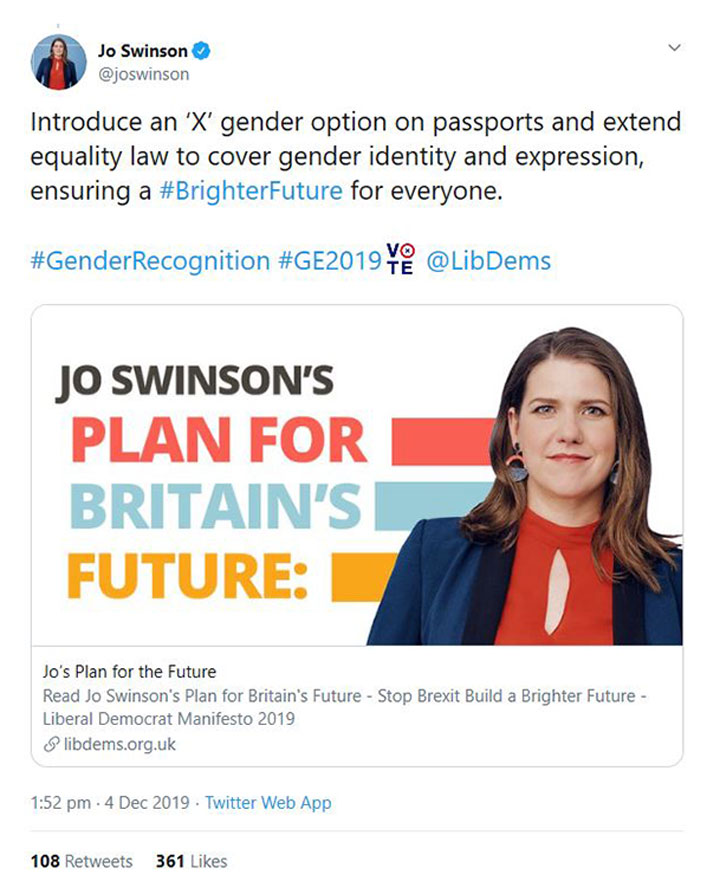 Thousands of people responded to her, with roughly three quarters in each case saying these were terrible policies and meant that they would not vote for the Liberal Democrats. 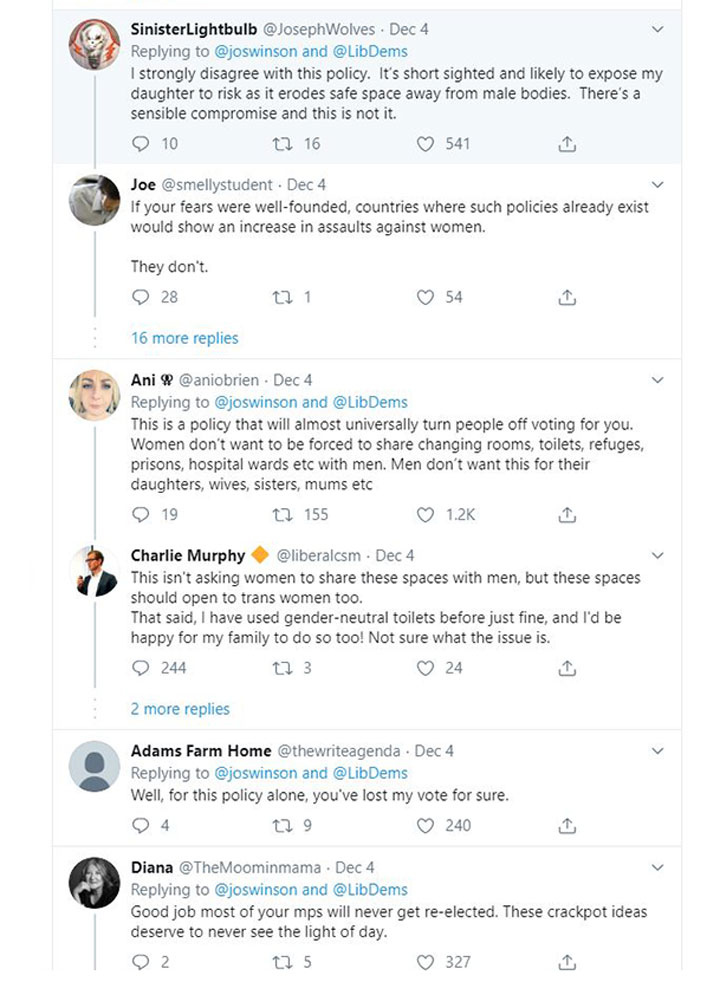 Given how Twitter use is biased towards socially progressive content, this is pretty damning evidence of just how much of a vote-loser these policies really are. Unfortunately, Jo Swinson seems to have been utterly undeterred by this reality. Her arrogance is shocking.

She was interviewed on BBC radio on Monday morning. The Liberal Democrats have obsessively pushed for gender-neutral school uniforms, a sign of total disregard for the need to distinguish children by their sexes in all aspects of school life. When pressed about whether such a policy would apply even to wearing headscarves in Muslim faith schools, she said that the point is that it would, that it would no longer be possible for only one gender to wear headscarves.

Where is the disapproval?

The Times’ revelation on Saturday should have led to Jo Swinson, the Liberal Democrat leader, distancing the party from its transgender policies and frankly there should have been a very loud chorus of disapproval calling for her to resign. Internal dissent and criticism of the Liberal Democrats for accepting this money was notable for its absence.

Every single newspaper and television and radio outlet should have been reporting this story and investigating further. Instead only the BBC picked up on The Times’ reporting. Perhaps most of the press thought that as most of their readers and viewers would not vote Liberal Democrat on Thursday there was no need to dissuade them from doing so in the first place. If this had been the Labour party, which also advocates transgender policies aimed at children in its manifesto, they would have been morally obliged to cover this story.

The effect on Liberal Democrat leaders

Party leaders will know of donations to their parties. For all this time since 2013 the Liberal Democrat leaders were silent on the risk to children from transgender policies. Several actively pushed for transgender policies. The party leaders were Nick Clegg, then Tim Farron, Vince Cable and now Jo Swinson. The deputy leaders were Simon Hughes, Sir Malcolm Bruce, Jo Swinson and Ed Davey. The party presidents were Tim Farron and Baroness Sarah Brinton. The Scottish leader has been Willie Rennie. The Welsh leaders have been Kirsty Williams, Mark Williams and now Jane Dodds.

Kirsty Williams is the only Liberal in the Welsh Assembly, but since 2016 has been Education Secretary in order to give the Labour government there a working majority. This means she has a huge portfolio and a great deal of power over not just education but social engineering. She has used her time to push transgender-friendly policies via public consultations on school uniforms and a new RSE curriculum that showed less regard for schools’ choices and parental rights than in England. Is this the effect of Ferring’s donation to the Liberal Democrats?

Were the Conservatives the real target?

The question hanging above all these revelations is, why did Ferring Pharmaceuticals donate to the Liberal Democrats, and why did the Liberal Democrats accept these donations? The fact that a donation was first made in 2013 means that this first happened when Nick Clegg was not only party leader but Deputy Prime Minister in coalition government with the Conservatives, with David Cameron as Prime Minister. This is highly relevant to the whole debate around gender reassignment for minors, which is bound up with the debate about freedom of speech on these policies. Policies affirming transgender identity as an unquestionable given crept into the Conservative Party during the time of the coalition government. This is probably not an accident.

The Minister for Women and Equalities at the time was Maria Miller. Later in 2016 she tabled a private member’s bill to amend the Equality Act 2010 to make gender identity a protected characteristic. In other words, she pushed for the UK to have a gender identity law allowing people to change gender without medical checks. Liberal Democrat Lynne Featherstone, one-time Parliamentary Under-Secretary of State for Equalities, is said to have persuaded Theresa May early on in the coalition period to adopt a socially liberal stance on LGBT issues. Both were responsible for guidelines against transphobic bullying in schools announced in the government’s Transgender action plan in December 2011. The donation of 2013 would have cemented this stance and made it more difficult for dissidents in both political parties to speak out, and possibly to be appointed to the relevant ministerial posts. Clearly a more thorough investigation of the changes within the Conservative Party is needed at this point.

Time to unseat the Liberal Democrats

The Liberal Democrats have clearly been bought by the transgender movement via this money from Big Pharma. As such, they have completely lost all moral legitimacy when it comes to policies regarding children.

Citizens should not only not vote for them in this general election on Thursday; they should actively aim to unseat them in the next Welsh and Scottish elections too, as well as the next local elections across England, Scotland and Wales. This is unless they do a 180 degree turn and purge their party completely of transgender ideology and refuse any more donations from Ferring. Politicians fear nothing more than losing their seats and expenses and these dangerous transgender policies won’t go away until we show them that they are vote-losers.

From Quarantine to Tyranny to Rebellion: Where Is the Line in the Sand?